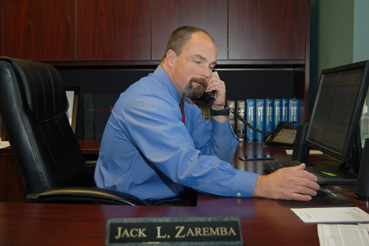 In 2006, Jack accepted an appointment as an Assistant State’s Attorney in Will County. As a well-respected prosecutor in Will County, Jack disposed of hundreds of criminal cases with offenses ranging from DUI to first degree murder. Jack has acted as first chair on over fifty bench trials and over thirty jury trials. His courtroom performance is unrivaled, and his aggressive and effective courtroom demeanor has even been described as “electrifying”.

Since beginning his own law firm, Jack has achieved successful outcomes in a wide range of criminal cases. His goal is to help each client avoid a conviction. Jack continues to put his aggressiveness and experience to work for his clients every day.

Jack is married to Ann Zaremba, who is also an attorney, specializing in commercial real estate. Jack lives in Will County Illinois, with his wife and four children.